with DLP projectors to produce outputs

Use Carima resins for precise printing

Carima specializes in developing professional and industrial-grade high-speed resin 3D printers, which have gained significant traction in the dental sector, but also continue to address medical and automotive demand.

The firm is the developer of ‘C-CAT,’ a process it says is up to 20 times faster than that of rival 3D printers, and is the “world’s fastest continuous AM technology.” To showcase the potential of its technology, the company plans to exhibit a demo unit, alongside its Carima DM400 and Carima IMD 3D printer, post-printing offering and samples created from 25 materials, at mnext from 15-18 November, 2022. 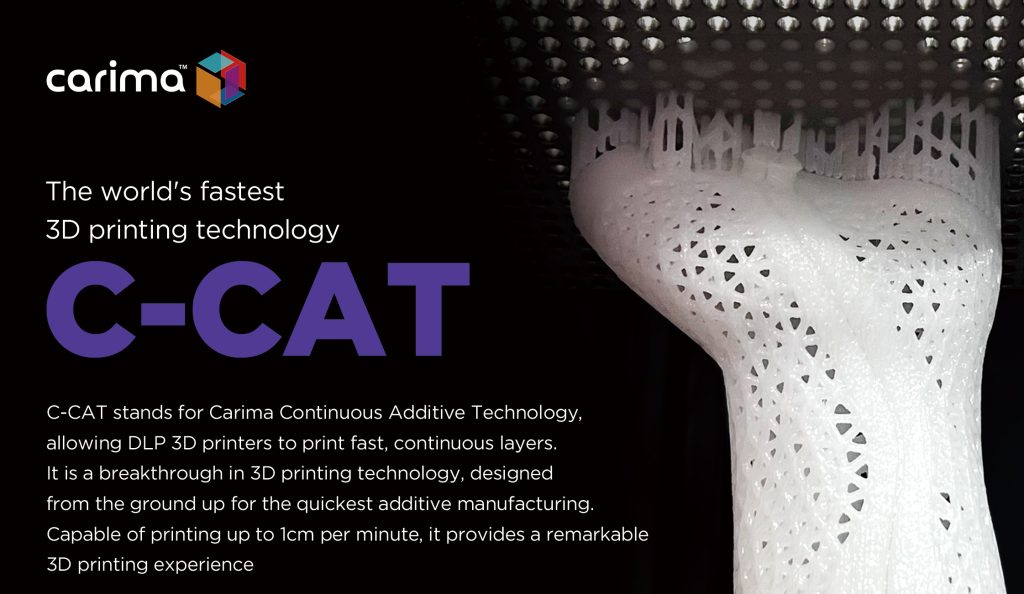 An explainer for Carima’s C-CAT technology. Image via Carima.

Established in 2000 by CEO Lee Byung-keuk, Carima is a firm with a background in the CK industry and the development of photolithography machines, which now operates in the 3D printing space. Byung-keuk founded the company with a vision of creating a ‘carry and imagine’ desktop resin system, which was compact and capable enough for users to move and rapidly deploy in any given environment.

Since then, Carima has been granted 23 patents, and it has 63 patents pending for the proprietary high-speed DLP technology, around which its product portfolio is based. As the oldest dedicated 3D printer manufacturer in Korea, the firm has also gained recognition in the wider industry, something reflected in its inclusion in the Wohlers Report.

Over the last seven years, Carima has worked with other businesses, research institutes and R&D centers to broaden its addressable markets. These initiatives have seen the company partner with software, hardware and material development groups, with the aim of meeting demand in the manufacturing, consumer goods and automotive sectors, as well as disrupting dental, its key target market.

The DM400 and a set of 3D printed samples. Image via Carima.

Developed in-house at Carima, C-CAT is a continuous printing process that enables the rapid curing of material at a rate of up to one centimeter per minute. The technology remains under development, with Carima engineers working on a way to reduce forces generated during resin release, which improves 3D printing stability. This is expected to be ready by the second half of next year ahead of commercialization.

At present, the firm’s portfolio includes a range of resin systems alongside its CL300Pro and CL1800 post-curing machines, Carima 3D printing materials and Carima Slicer V2. At the top end of the company’s offering is the Carima DM400, a large-format top-down printer with a 400 x 330 x 500mm build volume, and two 2K DLP projectors. These provide the machine with high-resolution 3D printing capabilities, and enable the production of parts with fine surface details, down to an accuracy of 133µm.

When it comes to 3D printing models for its core dental clientele, Carima also says the DM400 is “five times faster” than industrial SLA 3D printers with the same build area. As such, the company claims that its machine is fast and efficient enough for business adopters to reduce their equipment and labor costs, while easily printing resins like rubber with a viscosity of up to 10,000 centipoises (cPs).

Alongside the DM400, the firm markets the Carima IMD 3D printer, a versatile desktop machine with dental and medical applications. Though the system features a smaller 124 x 70 x 140mm build plate, it’s built around the same DLP technology. As such, the IMD, complete with FHD screen resolution and 99% light uniformity, doesn’t require users to compromise on repeatability or precision.

To post-process the parts made using its machines, Carima also offers the CL300Pro, a curing station that boasts a ⌀ 150 x 110mm curing area. Thanks to its 300W UV LED, the system is said to be capable of post-curing dental models at a rate of around three minutes per side, including not only the part’s surface but its complex internal structures. 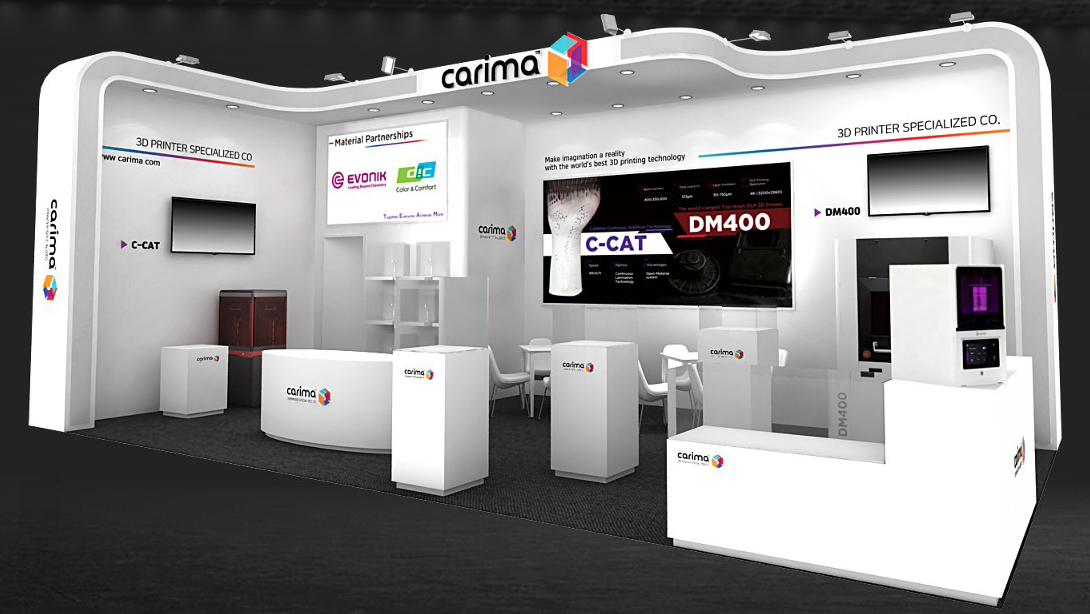 This year, Carima is taking its C-CAT technology on tour, by showcasing it at one of the biggest trade shows in the 3D printing sector. Set to be held in Frankfurt, Germany, the event will see over 730 exhibitors demonstrate the latest advances in the field, in front of fellow 3D printing firms, as well as experts, users and investors from across the industry.

At the show, Carima has revealed that it plans to showcase its IMD 3D printer in addition to its CL300Pro post-processing unit, and a variety of samples made from its proprietary resins, including Carima Non-toxic CMYK and Carima Tough.

More on the company’s 3D printing portfolio can be found via the Carima website, with machine pricing available on request.

While you’re here, why not subscribe to our Youtube channel? featuring discussion, debriefs, video shorts and webinar replays.

Are you looking for a job in the additive manufacturing industry? Visit 3D Printing Jobs for a selection of roles in the industry. 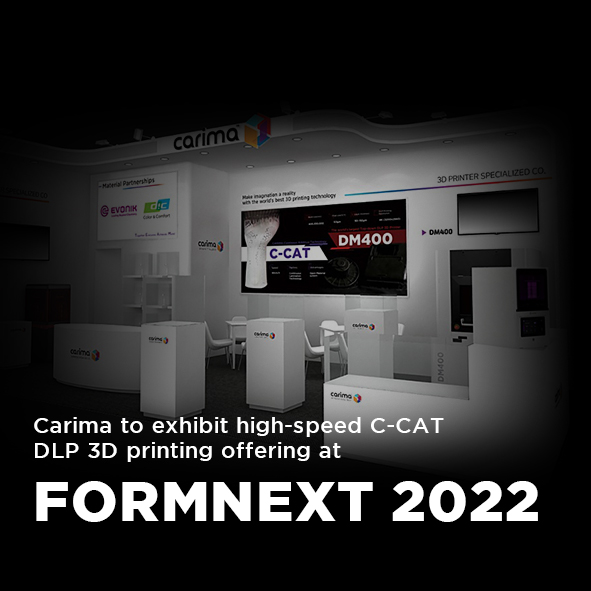 Reproducibility
Carima, the first 3D printer manufacturer in Korea, is a technology-intensive company and possessesDLP 3D printer technology since 2000.

Carima, the first 3D printer manufacturer in Korea,is a technology-intensive company and possesses

Ready to get started?
Ask us anything

Receive the latest news and exclusive offers. No spam